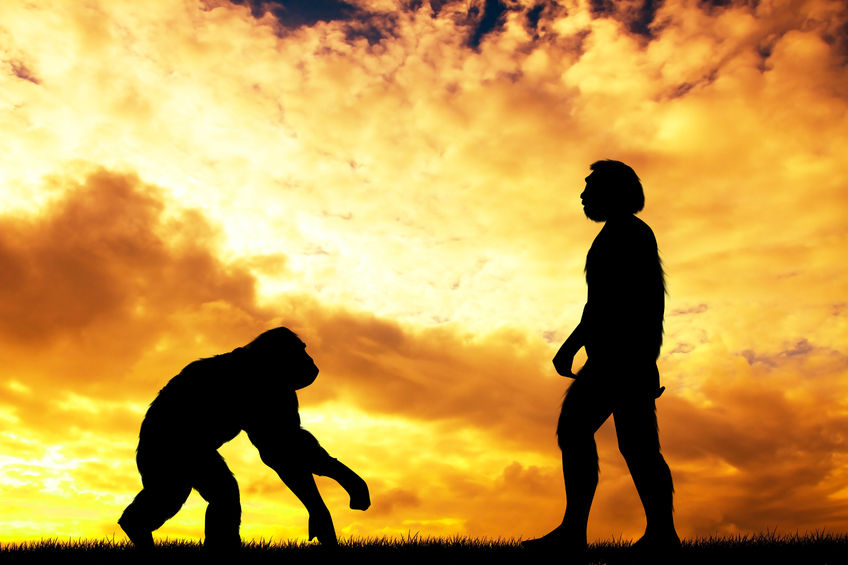 Questioning if evolution is true or asking the ‘evolution v creation’ question can cause an emotionally-charged conversation and be affected by a number of misunderstandings. We live at a time where the theory of Darwinian evolution is promoted (and accepted) as a fact almost universally whilst the suggestion of a divine creator will usually attract derision and the suspicion of religious fanaticism. Surely there must a clear-cut way to unpack this question – is evolution true?

What is your definition of evolution?

The answer to this question largely depends on our definition of evolution as blurred definitions will lead to immediate misunderstanding. When the term ‘evolution’ is used, it usually means one of three things:

This broad definition refers to things changing state in some way due to natural processes. For example, our surroundings ‘evolve’ from being ordered to chaotic unless there is input from us. In fact, the most common observation is that when processes are left alone, things tend to become less orderly and more chaotic – they certainly do not acquire new information or become more advanced.

Ideas and opinions ‘evolve’ due to experience and new information. Processes and systems are said to ‘evolve’ and become more efficient as better ways are found for doing things. Change over time is plainly observable whether or not these are beneficial or non-beneficial changes – this is often referred to as a process of something evolving from one state to another.

This is the “evolutionary change within a species or small group of organisms, especially over a short period.” This change happens within a genetic group, usually for survival, to adapt to its environment and can even within a very small number of generations. These small adaptations occur with existing genetic material resulting in different characteristics or traits, a process also known as natural selection. Despite the changes, each descendant retains the same genetic identity – for example, there is a huge variety in the appearance of humans but humans remain human without mutating into a different kind of creature.

The same is true with every living organism – there is an astonishing variety within species which evolves and adjusts to adapt to the environment, whilst remaining within their genetic blueprint.

The third definition is called the General Theory of Evolution by Charles Darwin, we would know this more commonly as macroevolution, or Darwinism.

Macroevolution is the “major evolutionary transition from one type of organism to another occurring at the level of the species and higher taxa.” This is the molecules-to-man hypothesis that every living organism that has existed (plants, animals, etc.) evolved from a single cell to more complex forms and to other species.

Under this definition, change occurs for the same reasons as microevolution, however, much longer periods of time required for the changes – often many millions of years. This would include large-scale changes such as from fish to reptiles and reptiles to birds. The fundamental difference here is that macroevolution requires new genetic information to be added to the organism in order to evolve. The problem is that the is simply no firm evidence that these kinds of changes take place and this definition of evolution is not supported by the scientific method.

What evidence is there for Darwinian evolution?

From example, in the fossil record, we would expect to find innumerable transitional forms all over the planet of fossils that is clearly in the stage of evolving from one state to another – remember, this happens over millions of year. Instead, the transitional fossils do not instead and they are known as ‘missing links’. With the sheer amount of time required for these changes, you would expect more than just a few debatable fossils – the world would be littered with in-between forms as organisms slowly evolve from one species into another. The problem is we don’t see evidence for this, the fossils we discover can be easily identified within existing genetic parameters.

In the past, it was claimed that the fossil record was real evidence for evolution, but from the millions of fossils discovered, not a single fossil proves the evolving process of transitional forms. Instead, there is no shortage of drawings and artists impressions, but no real evidence in the fossil record. The term ‘missing links’ tells the real story.

Dating methods are also used to identify the length of time that fossils have been preserved – however, in each case, there are a number of assumptions that are made to obtain these dates. For example, every dating method relies on the assumption that the rate of decay has remained constant during the time the calculation is made. Furthermore, there is an assumption that the environment in which the fossil has been preserved has remained undisturbed – very unlikely given the lengths of time involved. Worse still, there are examples when the results do not fit of sticking with the accepted evolutionary timeline and ignoring the evidence – a perfect example of circular reasoning.

The term ‘survival of the fittest’ is used to describe the way organisms adapt to their environment and compete for resources. However, this can only be done by selecting from existing genetic information within a species – no new genes are produced. This falls under definition 2 above.

Therefore, this is clearly a selective process not a creative one – for macroevolution to be true an explanation must be found for how new genetic information can be obtained.

As technology has advanced we have been able to understand much more about the bacterial world through microscopic research and bacteria are often used as evidence of evolution due to the rapid reproduction which can provide an insight into evolutionary processes a great speed! Mutations can occur very quickly, as is the case with antibiotic resistance.

Again, we observe that the bacterium are able to display different characteristics to adapt as their environment changes, such as with the introduction of an antibiotic. However, again, this is evidence for definition 2 and with all the examples of this, bacteria remain bacteria – it has not evolved into a more complex organism, and no new information has been received. In all cases, genetic information is lost, not gained. Even when the term ‘superbug’ is used, this is just an example of a highly concentrated gene-pool that has adapted to surrounding conditions – just like the finches who only had long beaks. This is simply natural-selection (microevolution) and not evidence of macroevolution.

Where is the evidence?

Despite the obvious fact that there exists a vast amount of different characteristics that exist within each species, there is no strong evidence showing intermediary changes that would account from one species evolving into another – certainly nothing that gets close to explaining the ‘molecules-to-man’ hypotheses that is usually presented as a proven fact.

To say “evolution goes too slowly for us to observe today” is not sufficient because it calls for faith without the evidence. Despite the assertion that ‘junk’ DNA and ‘vestigial’ organs are evidence for bad design, but this does not prove the absence of design. For example, evolutionists sometimes claim the human eye is a flawed design and therefore could not be the result of an intelligent designer. This is a rather absurd claim as we have not been able to create anything even close to a replacement, yet we are being asked to believe that unguided random processes led to something far superior to anything ‘intelligent’ and ‘creative’ humans can make themselves!

Consider this – ever since you were conceived, you have had a heart pumping blood around your body without ever breaking down – the heart starts very small and continues to function while it grows and works constantly for the during of your lifetimes without stopping! The same is true of all our organs – they all work constantly while growing. We cannot get close to designing something as clever as that! To suggest those systems are the result of an unguided random process is utterly implausible.

The complexity of a single cell is simply mind-boggling, not to mention DNA, our genetic code, which is so complex we are only beginning to understand these codes. For any cell replication to occur, a DNA code needs to exist first which is incredibly complex – information needs a designer.

In Darwin’s day, the technology did not exist to look into organisms and see their complex structures – Darwin made the following statement:

“If it could be demonstrated that any complex organ existed which could not possibly have been formed by numerous, successive and slight modifications, my theory would absolutely break down.” Charles Darwin

Unfortunately, his theory of macroevolution does not account for the observable evidence, but it is still promoted as fact.

One of the biggest problems here is that there is a lot at stake: reputations, livelihoods and careers are on the line – textbooks would have to be re-written. Not only this, the whole “religious” tag which goes hand-in-hand with advocating a creator is unavoidable – to accept the existence of a creator requires an immediate shift from atheism to theism – a huge jump for those who do not wish to accept the existence of God.

Without a creator, we are left with no alternative buy to postulate that the universe began out of nothing, literally ‘nothing’. For life has to begin, there would need a point at which something transitioned from non-living to living which goes against the scientific law of biogenesis – to subscribe to this theory this simply amounts in blind faith.

Doesn’t all the evidence point to a creator God?

For since the creation of the world God’s invisible qualities–his eternal power and divine nature–have been clearly seen, being understood from what has been made, so that people are without excuse. (Romans 1:20 NIV)

Please do not ignore this question – the world was created perfect, but ruined by humanity. However, we believe Jesus Christ will be returning to restore things soon – please invest the time to look into the person of Jesus Christ. He will change your life if you let him!

It is not easy for those within the scientific community to speak out about evidence that favours creation or intelligent design – those who do are often marginalised and can lose their jobs as we cover in an earlier blog – Science and the Bible – Lost Freedom. But here are a few examples where people are following the evidence: